Anne Frank was born in 1929 and 5 years my senior. She portrayed in her diary a life of hopes and expectations, growing up and looking forward to emancipation and maturity. But at the same time she was aware of the threats she was exposed to in her hiding as a Jewish girl. These threats were hovering as an imminent danger coming from unrepentant and destructive forces of a criminal nazi ideology and regime. Anne was finally brutally deported and she did not survive to see the days of liberation and freedom. She was one among the huge numbers of victims who suffered from –as was written some years later in the Preamble of the Universal Declaration of Human Rights – “disregard and contempt for human rights that resulted in barbarous acts which outraged the conscience of humankind”.

As we all know, in the Netherlands as well as in Argentina, many books and papers have been written about Anne Frank. She remains a source of inspiration and she continues to incorporate human rights and human values. One of the many authors inspired by Anne’s life was Mies Bouthuys. Her writing carried the title in Dutch “Anne Frank: Niet van Gisteren” (1982). This title, these words in Dutch hold a double meaning. They represent a notion of times as not belonging to the past but, more meaningfully and explicitly, they convey the ability of continuation, having a durable impact. Anne Frank personalizes a story that remains.

It is against the background of the story of Anne Frank that I elaborate some key or core notions relevant to human rights, all interrelated and linking the past, the present and the future:

Worldwide at all levels, locally, nationally, regionally and internationally, there were and there are deeply rooted patterns of exclusion of large parts of humanity: groups, minorities and entire peoples without real prospects for change. Such patterns persisted as a result of –to name some features and practices- (neo) colonialism, economic, social and cultural domination, autocratic powers, mistaken theories and practices of racial, national or ethnic superiority. However, over the years as part of a long-term process, in a spirit towards self-determination, emancipation, awareness building or conscientization, an enlightening process transpired, directed at inclusively living together. In this process the role of civil society as well as sophisticated means of communication and information had a considerable impact. This process from exclusion to inclusion as a sort of “soft power” movement –a power of words, declarations, proclamations, moral and legal texts -  was human rights related. In this context two historical texts may be cited as illustrations of age –old anomalies or contradictions:

These stories of liberal progress on the path of inclusive human rights, but with their anomalies, do illustrate that human rights remained for long the privileged domain of white males up till present times. It is true that traditional slavery may no more be rampant today, but contemporary slavery patterns and practices continue to exist, such as trafficking, sexual abuse, forced labour, trade of juveniles, recruitment of child soldiers.

Nevertheless, as indicated a moment ago, the “soft powers” of ethics, morality and solidarity are not necessarily on the losing aside. They are inherent in the recognition of the universality of human rights, in the scope and reach of the Universal Declaration of Human Rights (1948) affirming that every human being is entitled to the rights and freedoms enunciated in this document. In fact, the UDHR carries the quality and the capacity of being a “subversive” document. The “soft powers” and the inclusive nature of human rights are gaining ground with the increased impact of civil society together with the civil courage of human rights defenders.

The process from exclusion to inclusion is particularly evident in the evolution of human rights standard-setting at the United Nations by affirming and promoting the rights of those, individual persons and collectivities who for long were excluded and marginalized. Interest groups were successful in making claims to elaborate legal instruments and create special mechanisms for the rights of women, children, indigenous peoples, people of different colour, ethnic and national origin, religious minorities, migrant workers, the physically and mentally disabled and –most recently and facing more controversy and opposition- the rights relating to sexual orientation and gender identity. Lesbian, gay, transsexual and bisexual (LGTB) people are encountering deeply rooted barriers and obstacles, often of a religious and cultural nature. In many continents and through persistent efforts at national and international levels as in the United Nations the encouraging trend  from exclusion to inclusion is in progress and opening are made in law and practice.

The right to know the truth is a prominent right in efforts to bring about transitional forms of justice and reconciliation in societies that have experienced gross and flagrant violations of human rights, seriously trampling the right to life and the right to be free from torture, cruel, inhuman and degrading treatment or punishment. Like the story of Anne Frank the right to know is linking the past, the present and the future. As to the past we commemorate the legacy of Anne as a life between hopes and threats. Further, in present days’ perspectives we are facing the challenge of countering the spread of fake news and fraudulent versions of the truth. And regarding the future we have to confirm that the right to know the truth must provide a safeguard against the recurrence of the crimes committed. In this respect, the right to know the truth is meant to have a preventive effect and prompts the outcry – as an expression of rim commitment (or despair?) – “Never Again” or “Nunca Más”-

The right to know the truth defies the outright denial of the facts. It resists the language of cover-up, denial of complicity, the pretext of innocence and the legal and moral refusal of accountability. A revealing book was written on denialism by Stanley Cohen entitled “States of Denial: knowing about atrocities and suffering” (2001). Who are the perpetrators and are they the subject of retributive justice? And who are the victims and what about their entitlement to reparative justice? In many situations the number of victims and perpetrators is exceeded by the number of bystanders. What is their responsibility? These are agonizing questions which continue to beset the transitional justice discourse and practice. One aspect not to overlooked is that violation of the right to truth is a matter that affects not only the victims and their relatives but also society as a whole. As a Latin American scholar and human rights defender (José Zalaquett) has rightly observed, society cannot simply block out a chapter of its history and deny the facts of the past. A nation’s unity depends on a shared identity, which in turn depends largely on a shared memory. He continued: “The truth also brings a measure of healthy, social and catharsis and helps to prevent the past from reoccurring”.

The recent history after the demise of the military regime of state terrorism in Argentina was marked by the creation and organization of the National Commission on the Disappeared (CONADEP) so as ascertain the truth of what has happened. The detailed report of the National Commission published in late 1984 under the name of “Nunca Más” and chaired by one of the Argentine foremost respected novelists, Ernesto Sabato, constitutes a most impressive factual document of truth seeking and truth reporting. Ernesto Sabato concluded his prologue of the report with the following words:

“… The tragedy which began with the military dictatorship in March 1976, the most terrible our nation has ever suffered, will undoubtedly serve to help us understand that it is only democracy which can save a people from horror on this scale, only democracy can keep and safeguard the sacred, essential rights of man. Only with democracy will we be certain that NEVER AGAIN will events such as these, which have made Argentina so sadly infamous throughout the world, be repeated in our nation”.

Against this background it is remarkable that the echo and the postulate of NEVER AGAIN and the proclamation of the right to know the truth have been a permanent policy objective of Argentina to be inscribed on the international human rights agenda. Thus, it is on the initiative of Argentina, together with France, that the right of each victim to know the truth regarding the circumstances of the enforced disappearance is now consecrated in international law in the International Convention for the Protection from Enforced Disappearance (2006).

A review of activities organized and promoted by the Centro Ana Frank Argentina shows a broad and impressive range of best practices that are unique in Latin American and beyond. They reveal the high potentials of education and training as a lifelong process and widely recognized means to promote human rights. Let me just mention and select a few of such activities which are of particular relevance for tonight’s presentation:

This selection of the Centro Ana Fran’s good practices falls squarely in line with the 2011 United Nations Declaration on Human Rights Training and Education. The UN Declaration offers a wealth of insights and recommendations, which would deserve by themselves a full discourse. For present purposes a few major notions may be singled out, in particular that human rights education and training is a life-long process that concerns all ages (art.3); that it serves to develop a universal culture of human rights in which everyone is aware of their own rights and responsibilities in respect of the right of others and contributes to the prevention of human rights violations and abuses (art. 4).

Human rights education and training may also serve the cause of peace and reconciliation as I experienced as a high school student in the early years after World War II. At that time when the scars and their traces of the German occupation and nazi cruelties were still deeply sensed among large sectors of the Dutch people, my school here in The Hague was a partner with a German gymnasium (lycée classique) located in the city of Bielefeld in organizing an interactive exchange programme in Bielefeld and in The Hague. The principal subject of intense discussions pertained to such questions as what happened in World War II, why did this happen and how can we constructively live together as neighbours and as Europeans. I remember that many of us were deeply impressed by the frankness and the sincerity of the German teachers and students. Speaking for myself and for most if not all of my fellow students at that time, I gained a fair amount of assurance that we could face the future with our German neighbours in good confidence.

Finally, as already hinted at in connection with the UN Declaration of Human Rights Training and Education, it is essential requirement for an inclusive society that human beings are not only entitled to enjoy and exercise their own human rights but also responsible to respect and uphold the human rights of others. Keeping this in mind I may quote in conclusion the famous appeal of the German pastor Martin Niemöller, a victim of nazi persecution who survived. The appeal is widely known but impressive enough to be repeated.

“- First they came for the Jews and I did not speak out – because I was not a Jew.

- Then they came for the communists and I did not speak out – because I was not a communists.

- Then they came for me – and there as no one left to speak for me”. 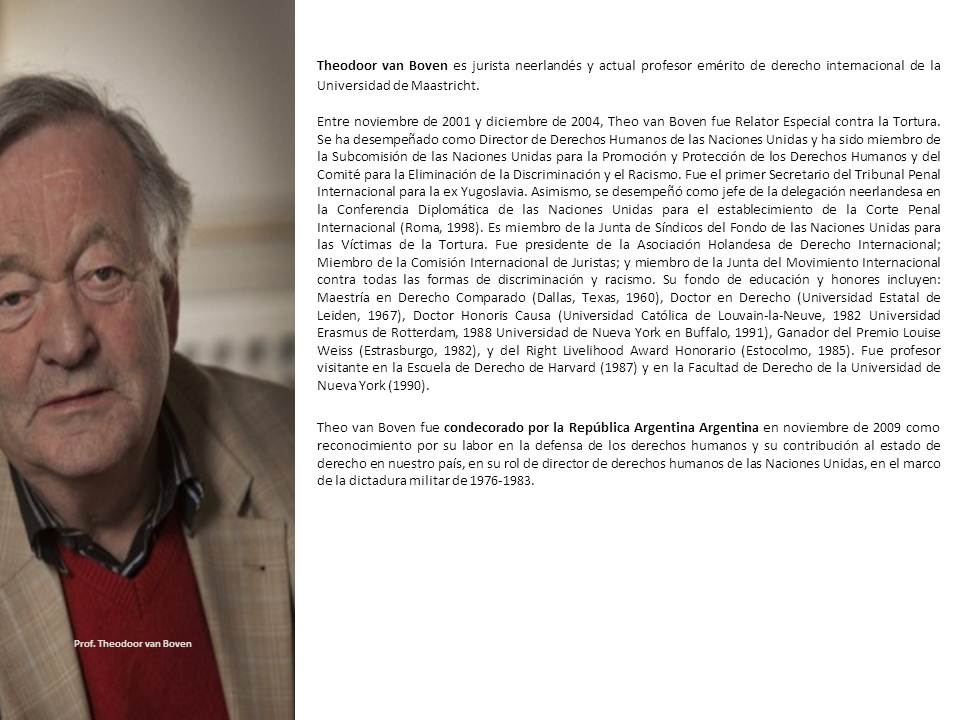